Defining and Delimiting the Exemptions for Executive, Administrative, Professional, Outside Sales and Computer Employees under the Fair Labor Standards Act

On May 18, 2016, President Obama and Secretary Perez announced the publication of the Department of Labor’s final rule updating the overtime regulations, which will automatically extend overtime pay protections to over 4 million workers within the first year of implementation. This long-awaited update will result in a meaningful boost to many workers’ wallets, and will go a long way toward realizing President Obama’s commitment to ensuring every worker is compensated fairly for their hard work.

Key Provisions of the Final Rule

The Final Rule focuses primarily on updating the salary and compensation levels needed for Executive, Administrative and Professional workers to be exempt. Specifically, the Final Rule:

Additionally, the Final Rule amends the salary basis test to allow employers to use nondiscretionary bonuses and incentive payments (including commissions) to satisfy up to 10 percent of the new standard salary level.

The effective date of the final rule is December 1, 2016. The initial increases to the standard salary level (from $455 to $913 per week) and HCE total annual compensation requirement (from $100,000 to $134,004 per year) will be effective on that date. Future automatic updates to those thresholds will occur every three years, beginning on January 1, 2020.

Benefits of HR Automation for Nonprofits 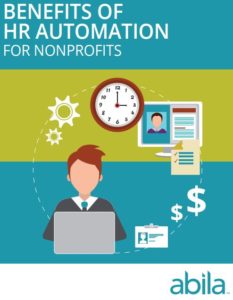 To help better illustrate how to automate your routine and classically core HR functions crucial to all organizations, we created a cheat sheet to showcase how you can easily unlock the 7 benefits of HR automation for nonprofits. Click here to download the quick guide!

In the guide, you’ll discover how an integrated accounting system and HR solution can help your HR and Finance teams:

As HR professionals wait anxiously for the release of the U.S. Department of Labor’s (DOL’s) final changes to the overtime exemptions, it’s becoming clear that the new rule will cost many employers a lot of money. But the revised standard also will create an opportunity for HR to correct some past mistakes.

Employers will spend $592.7 million to comply with the new rule, the DOL estimated, saying that each of the 7.4 million affected establishments will need one hour to get up to speed on the changes. The department calculated that it will cost $254.5 million for businesses to become familiar with the regulation; $160.1 million to make necessary adjustments; and $178.1 million in managerial costs.

“If you can do this in an hour, I might be calling you,” joked Alfred Robinson Jr., an attorney with Ogletree Deakins in Washington, D.C., and a former acting administrator of the department’s Wage and Hour Division.

In addition, the net transfer from employers to workers will be $1.48 billion, the DOL estimated, with $1.39 billion of that resulting in more overtime compensation or increased salaries, Robinson said.

However, there is a silver lining for employers. The rule provides the opportunity to reclassify workers who have long been misclassified, since reclassification without a reason for it, such as a new rule, can raise eyebrows, said Andrew Burnside, an attorney with Ogletree Deakins in New Orleans, speaking at the firm’s Workplace Strategies Conference in Chicago last week.

That said, the rule is expected to raise numerous challenges when some workers get pay raises to qualify for the new exempt salary level while other workers are reclassified as hourly employees.

One college, Virginia Wesleyan in Norfolk, Va., has estimated that the overtime rule would result in total increased expenses of approximately $712,845, the Huffington Post reports. Its salary obligations would rise $657,000, not including the additional outlays to the college’s retirement plan—an additional $55,845 contributed annually to the retirement plan due to the higher salaries for some employees.

Many businesses haven’t budgeted for these expenses, Robinson noted, and he said that nonprofits and local governments will be hit particularly hard because they don’t have the resources to increase salaries above the salary level threshold, so workers will have to be reclassified as nonexempt.

The final overtime rule is expected to increase salary level tests for the executive, administrative and professional exemptions, Robinson observed. He noted that the rule also may periodically increase the salary level if it is indexed to 40 percent of full-time salaried earnings or pegged to the consumer price index, a measure of inflation.

The salary threshold for the white-collar exemptions is expected to be anywhere from $47,000 to $50,440—more than twice the current annual level of $23,660. Robinson said he expects it will be at the lower amount of $47,000 to show that the department heard businesses’ complaints about the higher figure. But the amount still would be close to $50,000, he said.

The proposed rule mentioned the possibility of employers using a percentage of nondiscretionary bonuses to meet the increased minimum salary, but Robinson said he hasn’t heard anything further about that proposal.

While some employees will be bumped above the salary threshold for white-collar exemptions, at least for this year, others will be reclassified as nonexempt. Employers will have to “worry about off-the-clock work” by reclassified workers, who won’t be used to having to sign in and out, Robinson cautioned.

Robinson noted that factors to consider in reclassifying employees are:

Some pay provisions will not be affected, including:

However, the proposed rule increased the highly compensated employee exemption from $100,000 to the 90th percentile of earnings for full-time salaried workers, or $122,148 annually.

Robinson said there are a number of steps employers can take now. First, identify exempt positions where employees earn less than $50,000. Then, decide for which positions you will increase the salaries above the new salary level.

For those employees likely to be reclassified, he recommended determining:

Another consideration is whether benefits will change for workers moving from exempt to nonexempt.

After converting workers to hourly pay, employers will put restrictions on overtime work, he noted.

Options other than converting to hourly work include:

And employers’ communication plans and training should be at the ready.

The overtime rule “is not the end of the world,” Robinson concluded. “It’s changing the way we do business.”

Welter Consulting Nominated by EOCF as a Early Learning Champion!

At Welter Consulting, we are passionate professionals who choose to work in the nonprofit sector to help others and make a difference within communities. Creating ongoing relationships is paramount to us and we’ve especially enjoyed working with EOCF!  Thank you for the nomination and allowing us to continue to support EOCF and its mission! 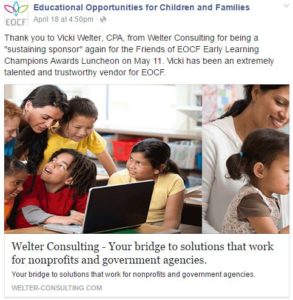